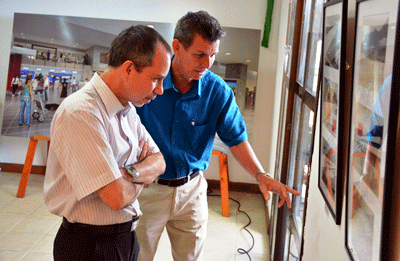 An exhibition showcasing 45 years of development, evolution and achievements of Seychelles in civil aviation since the first British Overseas Airways Corporation jet (BOAC) landed here on July 4, 1971, is on at the National Arts Gallery in Victoria.

It was opened yesterday by the chief executive of the Seychelles Civil Aviation Authority (SCAA) Gilbert Faure in the presence of several distinguished guests, SCAA board members and employees.

The exhibition, which will be on throughout this week, has been put together by the SCAA and it provides an opportunity to see where we come from, where we are now and where we are going in terms of civil aviation.

It has been described as a display of effort and hard work of the SCAA, formerly the Directorate of Civil Aviation (DCA), and its partners.

Addressing guests and SCAA board members at the event, Mr Faure described the 45-year journey of civil aviation in Seychelles as a historic celebration.

“But what does this mean for Seychelles?” he asked. “We put Seychelles and its people first,” he said.

“What does this mean for the global relationships of Seychelles? A group of small islands scattered in the middle of the Indian Ocean, we would have been just a dot on the Google Map, a people and a culture unknown had it not been for the development of civil aviation,” he pointed out.

“We now envision a destiny as an Indian Ocean gateway above and beyond Africa,” Mr Faure added.

But he told everyone present that more complete answers to the two questions were to be found in the colourful display of photographs taken over 45 years of development, evolution and progress .

He said they speak volumes and they do not lie.

Other than the photographs on display are also a collection of models of various types of aircraft which have touched down on our small airport over the years up to now.

As the Minister responsible for Foreign Affairs and Transport under which also includes the SCAA, Minister Joel Morgan took every one present on a journey down memory lane when 45 years ago yesterday July 4, 10,000 people flocked to the airport to witness the landing of the first commercial jet aircraft to Seychelles.

“It was a great day for the 54,695 inhabitants of Seychelles at that time, a lot of whom heard the roaring sound of the engines of the BOAC VC 10 as it approached our islands, penetrating from beyond the clouds from above Ste Anne in all its splendour in preparation for landing at our new airport,” Minister Morgan reminisced.

“It was a day that has gone down in the history of our country, where we opened access for air travel and laid one of the founding blocks for the development and growth of our tourism industry which today represents 30% of the country’s Gross Domestic Product,” Minister Morgan added.

He noted that as a result Seychelles would no longer be isolated from the rest of the world.

“Gone are the days of long arduous ship journeys on the Kampala or Karanja to Mombasa to connect to the rest of the world by air,” Minister Morgan reminded everyone present.

He went on to note that Seychelles is today better connected than ever  before in its history and will this year reach over 70 commercial flights per week, connecting  to all five continents through some of the world’s  most important hubs in Paris, Frankfurt, Dubai and Abu Dhabi to name a few.

While commending the SCAA management, employees, partners and stakeholders for the tremendous amount of effort and hard work which has resulted in all the development and progress on display in the exhibition, Minister Morgan also acknowledged continued effort to improve passenger comfort and modernise air navigation services.

Briefly he drew guests’ attention to the brand new extended facilities for travellers and visitors at the airport’s departure and arrival lounges, the 30kw solar power pilot project consisting of 120 panels which the SCAA introduced in February last year helping it to make an energy saving cost of R230,000 last year only.

The chairperson of the SCAA board Captain David Savy also led guests present through a moment of reflection on the aviation journey.

Before guests viewed the exhibition there was a symbolic presentation of tokens of appreciation to some key figures and personalities in Seychelles’ civil aviation and these included Minister Morgan, Mr Gilbert Faure and Captain Savy.