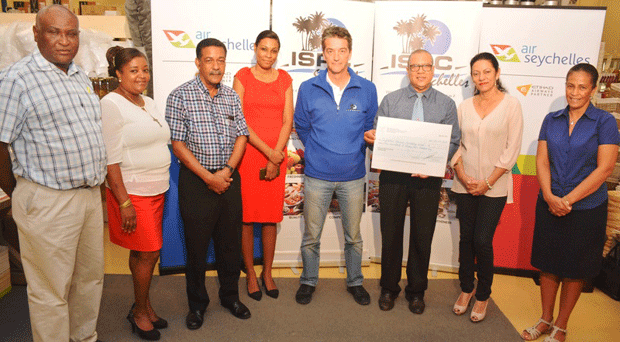 ISPC Seychelles yesterday handed over a cheque for R132,000 to the Seychelles Tourism Academy (STA).

This is money raised during the 2015 Seychelles National Culinary Contest and the subsequent annual gala dinner. ISPC was the main sponsor of the event.

It was the principal of the academy Flavien Joubert who accepted the cheque from the company’s chief executive Alfred Fourcroy at the ISPC premises at the Financial Services Agency (FSA) industrial estate, Roche Caïman.

Also present were faithful sponsors of the academy, namely Air Seychelles, who also contributed towards the fund raising. Other sponsors like Cable & Wireless, Constance Hotels, the Seychelles Tourism Board (STB) were not present.

The Seychelles National Culinary contest was held in August last year and was followed by the gala dinner in May this year. Both events were held in the new restaurant of the STA. The dinner was for guests and sponsors to experience the winning dishes from the culinary contest.

The date for the next contest, which is in its seventh year, is not yet known as Mr Fourcroy said he is still waiting for star chef Lionel Rigolet, head of the jury, to give his date as he is very busy cooking on a cruise ship close to Italy. But he also announced that Chef Rigolet should be in again around September for the qualification and the finals in October.

Mr Fourcroy thanked all who have supported the sixth contest, therefore contributed in the fund raising.

He announced the next contest is on the way and ISPC will be very glad to form part of it.

He urged all talented chef to come forward as it is an opportunity for them to show their talent.

Mr Joubert said this money is to be used for a very good cause.

“The STA is trying to get a Centre of Accreditation. If we manage to get that, we will be the first vocational centre in the Seychelles, tertiary, with full accreditation,” said Mr Joubert.

He remarked that through the Seychelles Qualifications Authority (SQA) a couple of professional consultants are being brought in and, along with local ones, will validate the STA. Hence the use of that money.

And if validated, the academy will be a fully accredited vocational centre.

Elaborating on accreditation projects, Mr Joubert said STA is trying to get accredited. And if the academy achieves that it will become a very credible vocational centre for teaching and learning, for the staff and for all the projects being undertaken by the institution.

The consultants will be at the academy for about a week carrying out a sort of audit to see if the institution qualifies for such accreditation.

Mr Joubert added that ISPC is one of the biggest partners of the tourism academy. It sells its products at 50% to STA.

“Therefore all these profits we make through ISPC is for the academy,” he remarked.

ISPC takes on STA students to work on a part time basis where they are paid R500 per shift.

“There are a lot of possibilities ISPC is offering the academy. It is for this reason that we profoundly appreciate such a partnership,” said Mr Joubert.

ISPC has opened what it calls an ‘atelier’ kitchen producing local items.