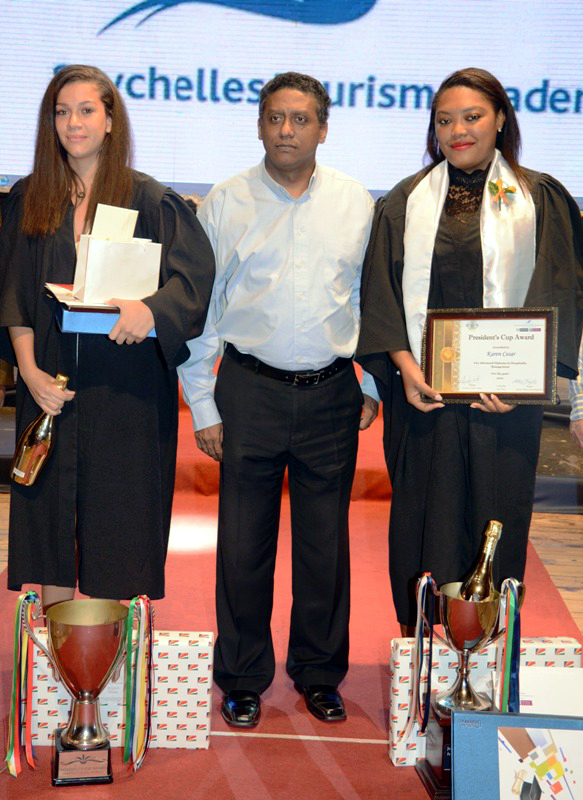 Two students of the Seychelles Tourism Academy (STA) – Karen Cesar and Alexandra Schnell – came out as outstanding performers and clinched the President’s Cup at this year’s graduation ceremony of the academy.

Karen and Alexandra were among the 230 or so who graduated yesterday in the STA’s annual graduation ceremony.

This is the first time in its graduation history that STA awards two President’s Cup as it had two cohorts graduating – one in the Hospitality Management Programme and one for the Craft Programme meaning the rest of the programmes offered by the institution.

It was Vice-President Danny Faure who presented the President’s Cups to both outstanding performers.

The academy also had tokens of appreciation for the government of Seychelles for its continued support to STA. These were received by the vice-president.

Also present were the principal of STA Flavien Joubert, Dr Philip Smith of Shannon College of Hotel Management in Ireland which works in partnership with the academy, ministers, members of the National Assembly, sponsors especially from the hospitality industry and parents.

Karen and Alexandra were rewarded for their involvement in the academy’s activities; were exemplary to other students and were also ambassadors for the academy. Besides the President’s Cup, they also received a certificate of merit and a prize of merit.

Their attendance and punctuality, which is greatly needed in the work environment, contributed towards the girls achieving the highest prize.

Other prizes on offer were two Minister’s awards for Most Outstanding Performance at the Apprenticeship level. These prizes were given by Alain St Ange, Minister for Tourism and Culture, the Seychelles National Youth Council prize for Most Improved Student and other prizes like best academic award, best practical award, best effort award in the Advanced Certificate and Certificate levels. There were also other prizes such as best academic award, best food and beverage award and best rooms division award at Advanced Diploma Level.

In his message to the students, Mr Joubert called on them to continue with their positive attitude, face challenges without fear of failure and be motivated at all times, go to work on time and respect job roster.

“Be a team player with respect for your work colleagues, both Seychellois and our expatriate guest workers who are here in Seychelles to help us. Be on your best behaviour and ensure obedience to your supervisors, departmental managers and your general manager. Finally, I call upon you to believe in your abilities,” he said while urging them to work hard and success will follow.

“When it does, do not let it bring you down. Do not sit back and reminisce about how things were before the change or how things could have been if the change had not happened. If you do this, you will not be able to move forward with the desired strength, positiveness and wisdom to overcome the challenges,” he said.

Mr Joubert also had words of thanks and appreciation for those who helped the academy along the way. Their Patron Claude Narain and the team at Constance Academy in Mauritus, board members of STA, Philip Smith and team of Shannon College and the University of Ireland and to travel agencies, hotels, guest houses, restaurants, Cable & Wireless, Air Seychelles/Etihad Airways and others.

“Shannon College of Hotel Management and the University of Ireland are proud to be associated with the Seychelles Tourism Academy. For the last seven years we have witnessed and developed its facilities and its offerings. This is very important for us as the university’s validation of the Advanced Diploma in Hospitality Management (ADHM) programme is dependent on STA’s continuing to meet the highest standard of quality assurance, teaching assessment and teaching support,” he said.

He remarked Shannon College has worked closely with STA to develop the ADHM programme in many ways, and has been involved in developing and supervising very strong college insurance procedures, and in assisting in providing both management and staff support.

All the STA students who have been to Ireland have been of a very high level, with a Seychelles student receiving an award of the highest mark in the whole college.

The students also had a vote of thanks for the occasion.

The ceremony was launched with the academy’s anthem ‘La Marche Vers l’Excellence’ and animated by song performances. 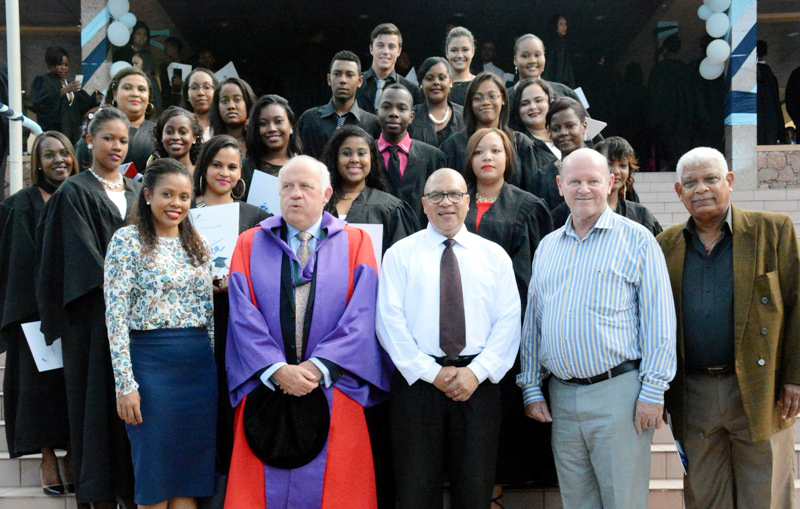 2016-07-14
mot3
Previous: Seychelles Tourism Board keep its travel agents in Reunion Island abreast of the destination and its products
Next: STA graduation – Hard work does pay off, best students aver