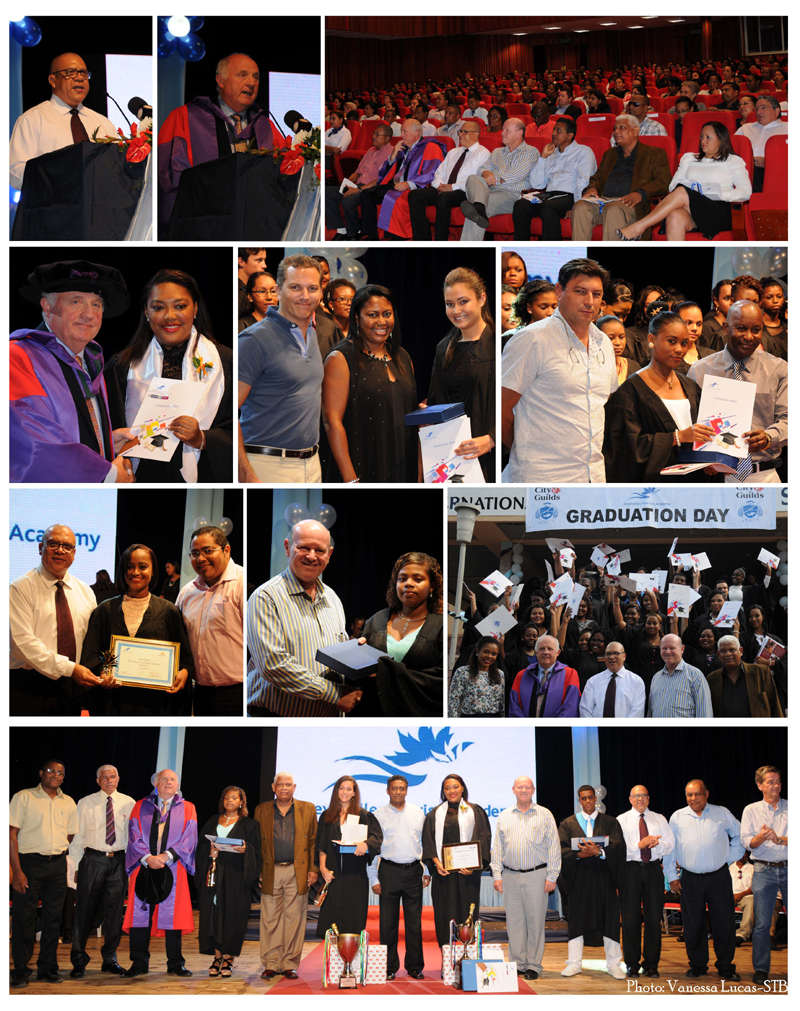 The annual Graduation Ceremony by the seychelles Tourism Academy rallies the island’s tourism trade to support the young graduates and also shows clearly that Seychelles has managed to empower its youth to be part of the industry that is today the pillar of their economy. The inclusive approach sees more and more young Seychellois being trained in a brand new purpose built Tourism Academy under the leadership of Flavien Joubert, the long time Principal of this institution.
This year Karen Cesar and Alexandra Schnell came out as outstanding performers and received the President’s Cup at the Graduation Ceremony. It was Vice President Danny Faure who presented the sought after award, the President’s Cup to Karen in the Advanced Diploma in Hospitality Management cohort. Karen also clinched the most outstanding performer award in her cohort.   Alexandra Schnell on her part pulled the most outstanding performer award for 2016. It was the first time that the Tourism Academy presented two President’s cup as it had two graduating cohorts, one in Hospitality Management Programme and one for the Craft program meaning the rest of the programs offered by the institution.
Other prizes offered were two minister’s award for Most outstanding Performance at the Apprenticeship level. These prizes were given by Alain St.Ange, the Minister for Tourism and Culture. The National Youth Council prize went for the Most Improved Student ahead of other prizes for best academic award, best food and beverage award and best room division award at Advanced Diploma Level.
This year 230 students graduated at the Tourism Academy and this prompted Flavien Joubert, the Principal of the institution to say as he addressed the graduation ceremony that gradients should continue with their positive attitude and to face challenges without fear of failure and for them to be motivated at all times. “Be a team player with respect for your colleagues, both Seychellois and our expatriate guest workers who are here in seychelles to help us. Be on your best behavior  and ensure obedience to your supervisors, departmental  managers and your general manager.  Finally I call upon you to believe in your abilities” said Mr Joubert.
Apart from Vice President Danny Faure and Tourism and Culture Minister Alain St.Ange, the graduation ceremony was also attended by Minister Idith Alexander, Claude Narain of the Constance Hotels Group who is the Patron of the Academy and Philip Smith of Shannon College of Ireland  amongst many other invited guests, parents and friends of the graduating students.
2016-07-15
mot3
Previous: Air Seychelles cabin crew graduate with flying colours
Next: Sunset viewed from Hotel L’Archipel on Praslin Island in the Seychelles shows off the unrivalled beauty of these mid-ocean tropical islands