Seychelles carnival “the best ever”! 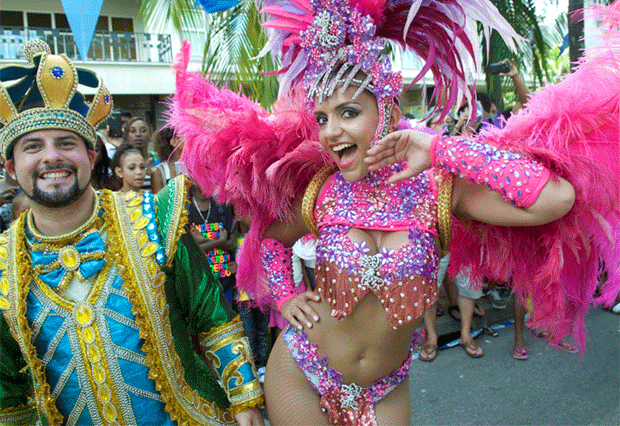 22 toAround 45,000 locals – half the country’s population and a record number of visitors poured into the city to soak up the atmosphere.

The excitement had been building for weeks beforehand as radio stations played carnival music, buildings were enveloped in swags of colourful fabric and decorations began to blossom on trees and lamp-posts. It reached fever pitch as the overseas carnival groups trooped through the airport on Mahé island lugging mysterious bags and boxes of costumes.

The first taste of the fun to come was at the press launch on Thursday 21 April, held at Deepam Cinema in the centre of town. Soca News soon spotted Claire Holder who ran London’s massive carnival for many years and now organises the touring Notting Hill Carnival Roadshow Company – and some familiar faces from Brixton-based Sunshine International Arts. The irresistible sound of pan from CSI Steelband soon got the Mauritian and Indonesian masqueraders moving.

This multinational togetherness is a unique feature of Seychelles’ carnival, which is very much the brainchild of tourism and culture minister Alain St Ange. He often quotes from John Lennon’s Imagine, and something of that song’s inclusive spirit permeates Victoria at carnival time. It’s a safe space where different cultures and customs can collide and mingle happily.

Carnival in Seychelles opens in front of the President with speeches (nothing moves in Seychelles without a speech) and, more importantly, a music and dance spectacular in the national stadium, Stad Popiler. Seychelles certainly knows how to put on a show, and Terry Carolla (Telsy Production) and his team excelled with a three-stage format that allowed super-quick changeovers between acts. Big screens gave the audience in the stands an excellent view of the action on stage, and a rear-facing screen allowed performers waiting backstage to see the show too – a thoughtful touch.

The show acted as a teaser for the main event the following day, bringing on one performer at a time from most of the overseas groups. With a backdrop of fireworks, much-loved local singer Joe Samy brought everyone together on stage for the finale. Somehow, Joe managed to find himself wedged between two sparkly Brazilian samba dancers – we all felt for his predicament!

Heavy rain had fallen earlier in the week, but when it mattered the sun shone, pushing the thermometer up to 32°C. The Germans from Cologne and Düsseldorf carnivals, in heavy woollen coats and boots, and the fat-suited Italians portraying Tweedledum and Tweedledee from Alice in Wonderland, must have been grateful for the shortened route from Bois de Rose Avenue to Freedom Square.

The set-up worked well and the carnival kept impressively to time, with parade leader Perkobe, a vast tortoise, setting off at 3pm and the final groups entering the city-centre park at about 6pm. However, the 42-strong Notting Hill contingent, whose costumes and masqueraders were drawn from several London mas bands, chipped and wined all the way back to their base at the Cable & Wireless depot, which they reached at 7pm, with smiles all round.

After Children’s Carnival, the weekend wound down on Sunday with a Family Fun Day in Freedom Square. Stage performances included high-energy dance and music from Mauritius (that brass!) and Réunion (those tambours!), tea and pandas from China, pyramidal acrobatics from India, fantastically elaborate costumes and an evocative soundtrack from Indonesia, and a leaping drummer from Ethiopia. Around the park perimeter, stalls sold creole food and rum-based cocktails, straw hats and multicoloured wigs.

After the prizegiving, the carnival officially came to a close. In reality, the fun continued well into the night for those who had sufficient stamina and no pressing need to get to work early the next day. Locals pointed out that Carnival is the one time of the year when sleepy Victoria parties all night long.

As the overseas carnival delegations queued up at the airport for their flights home in Africa, Asia, Europe and South America, some were still clutching little batons that proclaimed “Mon kontan Sesel” – I love Seychelles. It’s a sentiment that all those who visit this sweetly seductive country are bound to share.