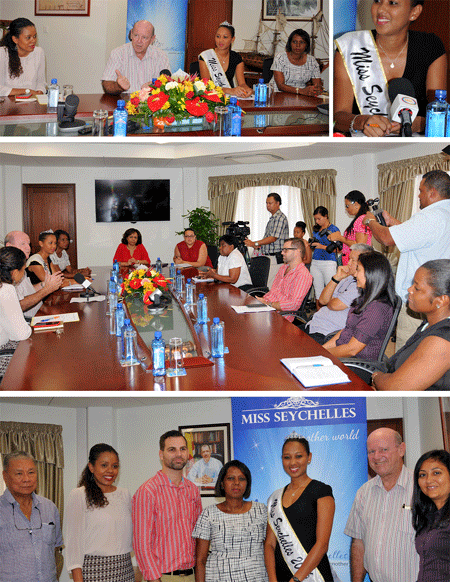 A group of contractors from the island’s private sector along with representatives from key governmental departments met the newly crowned Miss Seychelles…another world 2016 Christine Barbier last week to learn more on her beauty with a purpose project.

Miss Barbier presented her project to those who attended the meeting which was held at the Seychelles Tourism Board’s (STB) headquarters, Espace building. Also present at the meeting were the Minister for Tourism and Culture Alain St.Ange, the STB chief executive Sherin Naiken and the beauty queen’s mother Judeline Barbier.

The project entitled Children’s Home  ̶  Comfort, Care, Continuity is about building a halfway home for young people who have to leave the children’s homes when they reach the age of 18 and find their own way in life.
Miss Barbier said the project is set to inspire responsibility in the young people who will be using this facility as they will also help to maintain the halfway home.

“The halfway home will be a stepping stone which will help to build up the confidence of those young adults leaving the orphanages and it will also help to have a home temporarily as they start building a future for themselves,” she added.
Representatives of the private sector who were present agreed that the project is a good one and pledged their support to help make it a dream come true.

Minister St.Ange said the project was already on the cards of the government but it had so far not become a reality.

“With this project spearheaded by our Miss Seychelles…another world 2016 we have a chance to make it happen. It is a project that the government and the country need and want,” the Minister said.

Minister St.Ange said it has been discussed to have a representative of the Miss World Beauty pageant to join Miss Barbier in the foundation stone laying prior to her departure to this international pageant set for later this year.
He added that the head of state President James Michel is already aware of the project and has already given his support.
Minister St.Ange added that the home can also cater for battered people, who can spend a night or two there.

Now that the project has received the support of the private sector, Miss Naiken said the next step is to draft a business plan and getting the government’s approval.

Also speaking was the special advisor at the department of social affairs Marie-Josée Bonne said the project is a worthwhile one but those involved need to ensure its sustainability and to take into account the needs of those who will be using the facility.