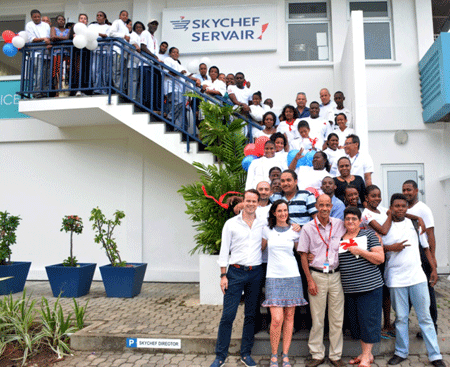 Over 200 staff who work for Skychef Servair had great cause for celebrations yesterday as the service catering business clocked 45 years of culinary excellence.

In a short ceremony held on its premises at Pointe Larue, the founder of Skychef, the late Panos Papakokkinos was recognised by his daughter Georgia Van Heyste and Skychef chief executive Neville Morel.

Mrs Van Heyste, who is also a director of the company, said, “It was on July 4, 1971 that Skychef catered for the first commercial flight from a small house off the runway called Paradiso. In honour of my father Mr Papakokkinos we recently opened Cafe Paradiso, in the departure lounge of the Seychelles International Airport. Today we commemorate Mr Papakokkinos and his loyal crew for their hard work and dedication which has made the company into what it is today.”

She also took the opportunity to thank the long standing staff who have worked tirelessly in the day to day running of Skychef.

For his part, Mr Morel gave a brief account of Mr Papakokkinos and the setting up of the service.

He said Mr Papakokkinos arrived in Seychelles before the arrival of the first commercial jet to set up his kitchen.

“When he first opened his kitchen it was only 50 square metres and at that time he operated under Nairobi Airport Services (Nas), then Nas was later bought by Dobbs and the company was called Dobbs International. Later on in 1980, Mr Papakokkinos got the opportunity to buy the company and he partnered with the government, that is when Skychef was created,” he said.

He noted that now at 3000 square metres with over 200 employees, in the beginning Mr Papakokkinos had a team of only ten employees.

Apart from Café Paradiso and Skychef shop, Mr Morel said there are more projects to come but they need workforce to realise these projects.

“The challenge we face today is to find people who are qualified and responsible, we are not able to find reliable staff,” he said.

He also thanked all the staff members for all their work and effort over the years.

The airport yesterday also commemorated the 45th anniversary of the landing of the first commercial jet on July 4, 1971 (see lead story).

The remarks were followed by the cutting of a commemorative cake by Mrs Van Heyste.